Presence is a powerful thing. Absence is heartbreaking. But in order for the reality of presence to be the most powerful, absence in some form has to be realized.

In mid-March I stepped off of a plane onto foreign soil, and into a new normal full of presence, love and a consistent outpouring of the Holy Spirit that is overwhelming at times. A good overwhelming…one I have been aching for over the past several years.

On my first weekend in Haiti, I got out of the van at Leogane and there was a small fellow that chose me. It is an intense emotion to be chosen, and I’ve been honored to experience it before in other places where I have been stepping into the world of an orphan. The first time was 10 years ago when it changed me, and I thought it would never happen again. It did, and it has again…a few times over.

I wasn’t expecting it so soon. I thought it would take time, since I’ve got nothing but time to invest and love over the next year or so.

But this little guy stood out like God had placed a neon sign over his head…just for me.

We colored, we put stickers on a foam sheet and we were present. He was content to just sit in my lap or climb in my arms, and I was content to let him.

God marked that moment…my first village, my first weekend on the ground, my first experience with Global Orphan Project in Haiti as well as the amazing realization that I get to come back to this place and these kids every other week, if not every week. God marked all of those moments with the presence of Chales.

The next week as I accompanied another team out to Leogane, I didn’t see him and other kids were pulling on me. I had given myself a pep talk that morning, “It’s not about forcing relationships. He might not remember you. This isn’t about me, it about supporting local church who are giving these kids what they need.”

Honestly, I had the humorous conversation in my head of “Is this is the kid I think it is? I’ve met A LOT of kids…” 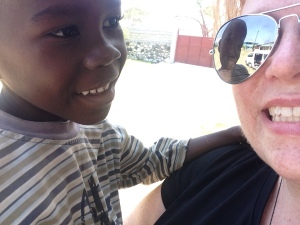 Then I pulled out my phone and brought up the photos from the first weekend of the two of us when he was making faces in my mirrored aviators and making himself laugh. Chales looked at the phone, looked at me, looked back at the phone and exclaimed, ‘Me! Me!’ quickly followed by ‘You! You!

He never left my side the whole time our team was there. He wanted to be held. He kept touching my arms to make sure I was still there. He played with the other photos on the phone. He was so excited when he saw himself from 3 weeks earlier and kept wanting to see that first photo. That day was a blessing. A huge blessing…the blessing that is the tangible touch of God on us.

Last Monday found me dropping one team off at the airport, and joining another for their day…to Leogane.

I had one foot on the ground and wasn’t even out of the bus before he was in front of me with his arms up begging to be held. We walked the property with him on my hip, on my back, back on my hip before I was told to ‘Sit down.’ in Creole, at which point he climbed into my lap.

Just to be clear, when the kids want to be held then fall asleep in our arms, it is HOT in Haiti, and the kids start sweating when they sleep. That’s right, go for the mental image of how sweaty we are combined with how sweaty they get…mmhuh…there, you got it.

I am in Haiti, because God’s story intersects with my own. I am here because God’s presence in my life give me opportunities to make choices to obey his calling. God’s story is massive. He is the God who reigns over the entire universe. We get to be present within God’s story and live in God’s truth. My story gets to claim a piece of God’s story, and God grafts it into his overall story. Each person that travels down here gets to claim their part of God’s story in Haiti. These kids transform lives. Haiti transforms lives, and sends teams back to tell the story in their home congregations and groups.

God calls us all to be story tellers wherever he might have us in the world. It is exactly how Jesus sent the disciples out to bear witness to what they had seen. If the disciples had not been story tellers…we would not be believers.

Our world is beautiful, but it is most beautiful in the moments that God graces us with a picture of his Kingdom. His Kingdom was alive and present when my story and the story of an orphan named Chales collided as he fell asleep in my arms in the exact place he was in my arms 4 weeks earlier. And then God brought the revelation that I would be back in that place…soon. It was not a 5 day trip, or a 10 day visit to some amazing kids for me. I get to come back, and that is something I have been felt called to for a long time.

As I was leaving I was thanking the pastor for allowing us to come, when his immediate response was, ‘We wait for you to bring more friends to us!’

Then I asked, ‘Pastor, what is Chales’ story?’

Pastor responded with, “Oh! That boy there? He is from a village far, far away on the coast of Haiti. Water came in, and took his whole family out and he was the only one left. A pastor friend of mine called and said, ‘Can you take this boy?’ and I could not refuse even though it was so far, far away.”

As Chales slept, combining a gargantuan amount of his sweat with my own, he would startle in his sleep and his little hand would tighten around my neck to make sure someone was still there. Holding him that close all day made me very aware of the smell of urine on him. Nightmares? Bullying? Only God knows. I will never forget that tight grip of a boy who saw his family taken away, lost everything he knew and found himself in a place with 80 other kids far away from home.

It is the telling of the moments when our stories collide in this world, when God marks us and allows us to see glimpses of his Kingdom, that further the Kingdom of God more than a sermon (sorry, Shawn!), a worship song (sorry, Jules!) or conference. In the absence of God through our sin, we find the presence of something powerful through story telling that brings us face to face with salvation which always pushes us back to the heart of God and into his presence.

It is in your willingness to be present, and not distracted by the things of this world, when God is showing up that finds your story to colliding with his. It is being obedient to God. It is loving him so much that it physically pains you to be separated from him. It is believing that God shows up in relationships and community.

Be a story teller. Be willing to share yourself with others. Be open to loving unconditionally. Be a risk taker. Be a Kingdom walker. Be present.