Lord, who am I that you would honor me with your presence?

Who am I that you would call me chosen?

Who am I that you would call me into an intimate journey with you?

The inner ramblings of my soul were intensified after a holy encounter at Leogane last week.

It was an odd mix of ages and eclectic life experiences, paired with intense love for music and Jesus.

Our trio of Americans walked to the back of Leogane as our pint sized entourage floated around us to visit the grandparents. Arriving under the shade of the mango tree, we were quickly told to sit as grandparents left their own seats to offer us their ingrained hospitality. The young man with us adamantly tried to get the grandmas to sit back down, so he wouldn’t take precious seating. Then he succumbed to their extreme hospitality when one grandma brought over a tattered business chair missing the back rest and padding, as she quietly put a pillow down for him to sit on, then pushing him into it.

A weird mix of emotions collides in those moments.

The young man tuned his guitar, the song sheets were held under the teamwork of feet so the wind would not claim it and music was offered into the air.

But then God made himself known and his Holy Spirit presence became tangible. What was meant as a gift of music became a merging of worship by al l ages where language is only an afterthought while the only real language needed is communion with the One we serve. Time suspended. Prayers were offered. Sacred ground.

The gift of discernment in the moments of worship is unique to incredibly talented individuals and, the young man and woman sitting with me are incredibly talented. They will continue to grow and they will continue to carry experiences with them that defined their future, but I truly pray last week marked their lives in the way only the Holy Spirit can mark someone. It is cloudy to see at times and this world makes it distorted, but they honored the sacred ground God created through their talent by simply being present.

As they finished the last song, the notes drifted up and away, and the Creole prayers that had been murmured the last few minutes became audible. Beautifully crafted and time scarred hands covered faces as the women who sat with us prayed. Church should not be bound by building, language or culture, and worship cannot be contained to lyrics and notes. As I caught glimpses of these women I love and deeply respect, they were worshipping at church as tears glistened in their eyes. God used these two teens to bring a random time of church into the sacred space of the widows and orphans living together at Leogane due to some version of being discarded, abandoned and victims of poverty in Haiti. Young or old, it’s the same classification of orphan that God calls us to champion.

Mustering every ounce of Creole I could, I launched into broken Creole, “They are happy, too. They wanted to bless you with their music.”

Immediately, the grandma sitting closest to us thrust her hands over her eyes to hide her face, yet glanced back at us with questions in her eyes.

“Why would they want to bless me? I want to bless them,” she repeated over and over again as her humility at the thought of her guests, in her home, wanting to bless her overcame her.

I took a deep breath before I translated it to the teens around me, because in those simple words that moment of worship became one of the most Holy moments I’ve been a part of in Haiti. Images of women in the Bible who were marked and healed by Jesus flooded my mind along with what they might have humbly said in Jesus’ presence.

The Samaritan woman at the well…“Who am I that he knows what I did?”

The adulterous woman awaiting the rocks to be thrown…“Who am I that he would stand up for me? That he would not condemn me?”

Mary as she used an expensive bottle of perfume…“Who am I that he would accept this gift from me?” While Jesus defended her actions with, “Leave her alone. It was intended that she should save this perfume for the day of my burial. You will always have the poor among you, but you will not always have me.”

Mary as Jesus appeared to her after his resurrection…“Who am I that he would show himself to me?” 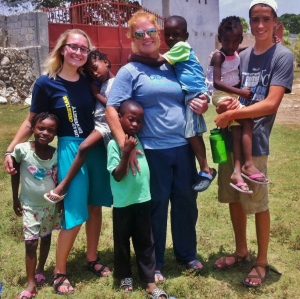 As I translated to the teens, the startled look in their eyes was clear…what they had intended as a simple gift of music had turned into a moment in their young lives that they would have a difficult time putting into words or even pointing back to as holy. Each of their minds raced to think of what to say as the symbiotic blessing became inexpressible among us.

Who were we to be allowed to step into that Holy moment together?

Who were we to be honored with the presence of each other?

Haitians and Americans. Young and old. Sunk deep into, and marked by, a holy moment lead by the intense humility of one woman intensely loving and honoring her Savior.